By Richard Lewis
Concrete is not a new material – its use probably goes back at least 25 centuries – but what is more contemporary is the concept of using ferro-concrete to build ships. It was in 1848 that Frenchman Joseph-Louis Lambot built a ‘ferro-cement’ dinghy and his invention and materials – ‘Ferciment’ – were patented and presented at the 1855 ‘Exposition Universelle’ in Paris. By 1917, Norwegian Nicolay Fougner had launched an 84’, 356 ton ocean-going self-propelled ferro-cement ship named Namsenfjord.

During World War 1, German U-boats had sunk 5000 Allied Merchant vessels with a Gross Registered Tonnage (GRT) of nearly 13 million tons in the Atlantic alone. This heavy loss of ships, combined with an acute shortage of steel, led both the British and USA governments to look for alternative materials with which to construct ocean going merchant vessels. In 1917, the British Government contracted with 21 new shipyards to construct 154 reinforced concrete ships – 24 Steam Tugs and 130 Barges – to deliver 200,000 tons of merchant shipping. ‘The Crete Fleet’ was conceived.

A major Irish beneficiary of these contracts was a shipyard at Warrenpoint – J&R Thompson – which received orders for 10 concrete barges. The shipyard was known as ‘The Old Point’ and whist no longer visible – it is now absorbed into the Port of Warrenpoint – over 400 people were engaged in the concrete ship building effort by the side of Carlingford Lough.J&R Thompson didn’t build the Crete barges entirely alone. McLaughlin & Harvey of Belfast, established in 1853 and still thriving today, were instrumental in the building of the barges at Warrenpoint. Such an unusual ship building material required expertise in concrete, not just in ships. The concrete itself required innovative new techniques and an advanced knowledge of concrete chemistry. The Warrenpoint barges were built utilising the patented ‘Mouchel Hennebique’ monolithic reinforced concrete system.

Armistice on 11th November 1918 brought an end to the First World War by which time only 4 of the concrete vessels had actually launched. By March 1919, the concrete shipbuilding programme was cancelled and by 1920, 64 concrete ships – 12 Steam Tugs and 54 Barges had been completed and launched by 17 shipyards around the UK.

J &R Thompson built 4 barges – Cretefarm, Creteforge, Cretefield and Creteforest and their remaining 6 orders were cancelled. Each barge was over 180’ long with a 712 GRT.

Cretefarm – Registration No. 143180 – was launched broadside into Carlingford Lough on 18th December 1918. Unfortunately, following her launch, Cretefarm broke her anchors and drifted on to the shore, damaging her hull in the process. In February 1919 she was adequately repaired to be towed to dry-dock in Dublin before being completed in the June of that year. Shipping records show her voyages across to continental ports such as Rotterdam, Hamburg and Cuxhaven before being mothballed on the Tyne in 1924

Creteforge – Registration No. 143194 – was launched on 5th March 1919 and registered on 7th May 2019. After a few voyages to ports such as Boulogne and Dunkirk, generally carrying cargoes of coal from the North East of England, she too was laid up on the Tyne.

In 1929, Creteforge and Cretefarm were sold to ‘Banco de Crédito Gijonés’ and re-registered under the Spanish flag. Their destiny was to be used in the development of a harbour at Candás, a small fishing village in Asturias in the north of Spain. By 2003 they had disappeared from sight, absorbed into an extensive harbour redevelopment.

Cretefield – Registration No. 143359 – was launched in April 1919 and in 1922, she was sold to a Waterford based coal merchant, Messrs Geoffrey Spencer and towed up the River Suir to a berth at Gratton Quay. The next known position of Cretefield was as a pontoon at Belview Port, Co. Kilkenny.  In 1990, Cretefield was offered for sale by the Port of Waterford and acquired by Carlingford Marina Enterprises. Today she is sunken as part of the Carlingford Marina breakwater wall, clearly visible at low tide and just a few miles from where she was built.

Creteforest – Registration No. 143396 – was the last of the J&R Thompson barges, launched in June 1919 and completed in the September of that year. Creteforest was acquired by ship dismantlers Hughes Bolckow & Co. Ltd of Blythe in 1924 and scuttled in the North Sea in 1925. Today, two of the Crete Tugs survive in Irish waters, Creteboom and Cretegaff, both built by the John Ver Mehr shipyard at Shoreham-by-Sea.

The highlight of her working career was in 1924 when she was involved in an operation to tow the World’s largest Floating Dock from the Tyne to Southampton. Built for the Southern Railway by Armstrong, Whitworth & Company based on the Tyne, the floating dock was 960’ long, 170’ wide and weighed 19,000 tons.

In 1935, Creteboom was sold to the South Stockton Shipbreaking Company on Teeside and dismantled before being sold on as a ‘hulk’ to Ballina Harbour Commissioners, arriving in Ballina on 22nd September 1937. Creteboom was to be utilised as a sand stop at the mouth of the River Moy – an idea that met with fierce opposition from the Moy Fishery Company – but unfortunately she ‘sprang a leak’ on her voyage and hence was towed up the River Moy close to where she lies today. On March 16th 1974 she was briefly re-floated and towed a short distance across the river.

Cretegaff – Registration No. 144632 – was completed in July 1920. Her 750 i.h.p triple-expansion steam engine was built by J Milne & Son of Edinburgh. In 1933, she was acquired by S.A. Portus of Garston, Liverpool, a towage and salvage company that had secured a contract to carry Daily Newspapers from Liverpool to the Isle of Man. The contract was lost when Cretegaff diverted to salvage a drifting cargo ship and the newspapers did not arrive in Douglas that day.

During 1935/36, Cretegaff was dismantled by Frederick Oldham Ltd of Liverpool, her boilers going to a laundry in Wavertree, and in 1937, her hulk was sold to Drogheda based Irish Oil & Cake Mills Ltd to be used for storage of oil barrels. Having settled in the Port of Drogheda, she became known as ‘The Lady Boyne’. In 1960 she was acquired by Drogheda Harbour Commissioners for £10 and by 1962, the Silica Sand had bought her for an undisclosed sum with the probable intention of using her for a jetty development. By the late 1960s she was effectively abandoned on the River Boyne, shuffled from place to place and eventually ending up abandoned at Donor’s Quay. 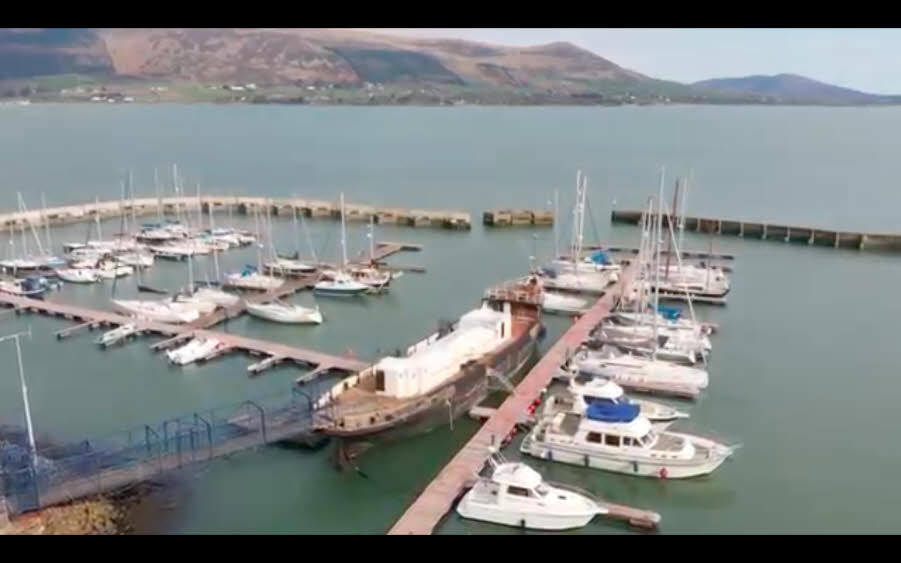 In 1988,‘The Lady Boyne’ was acquired by Carlingford Marine Enterprises and following a complex salvaging exercise, towed to the new site of Carlingford Marina. During the first phase of the Marina’s construction, Cretegaff was used as a floating breakwater and as the Marina extended to the east, Cretegaff stayed in the same mooring which became the centre of the marina. For a time, she was used as a Clubhouse and shower facility until 2001 when the Marina facilities landside were completed. Today she is the hub of the jetty and pontoon system that serves the marina berths.

Cretegaff is the only surviving British concrete ship built over one hundred years ago that still floats. Creteboom on the River Moy and Cretehawser on the River Wear near Sunderland are the other two surviving tugs. Cretebode, a barge, is on the River Tamar near Plymouth, Cretetree is used a fishing net store on the Isle of Scalpay, Outer Hebrides and Cretejoist is beached at Fevåg, Norway. There are numerous other visible ‘relics’ of The Crete Fleet dotted around Europe & Africa either as quays or wrecks, details of which can be found on www.thecretefleet.com

The Maritime Museum would like to thank Richard Lewis from www.thecretefleet.com for writing this fantastic history of Concrete Ships.