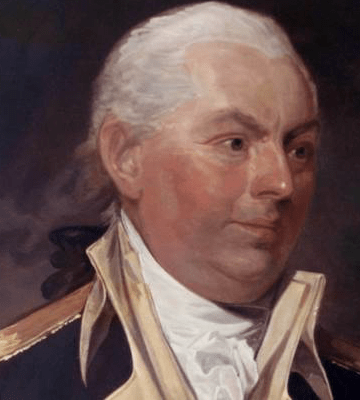 John Barry, (born 1745, County Wexford, Ireland – died September 13, 1803, Philadelphia, Pennsylvania, U.S.), Barry became an American navy officer winning significant maritime victories during the American Revolution (1775-83). During his career he trained many young officers, with many going on to distinguished careers, he was often given the name the ‘Father of the Navy’.

A merchant shipmaster out of Philadelphia at the age of 21, Barry outfitted the first Continental fleet at the outbreak of the Revolution. Commissioned captain of the brig Lexington in 1776, he had an early victory by capturing the British tender Edward after a short engagement. He fought with distinction in the campaign around Trenton, New Jersey (1776), and was then commissioned captain of the frigate Effingham, unfortunately he had to scuttle to prevent being captured by the British.

Commanding the frigate Alliance in 1780, he was charged with escorting Colonel John Laurens on a diplomatic mission to France. En route he had many skirmishes and in returning engaged in a notable battle with two British sloops of war, eventually winning them over.

On the final cruise of the Alliance (beginning in 1782), Barry patrolled the shipping lanes from Bermuda to Cape Sable and captured four British ships. He fought the last battle of the war (March 1783) in the Straits of Florida, where he saw off three British frigates attempting to seize his ship.

After the war Barry was recalled to active service as senior captain of the new U.S. Navy. In the quasi-war with France (1798–1800), he was twice in command of all U.S. ships in the West Indies. At the end of his career he was senior officer of the navy.