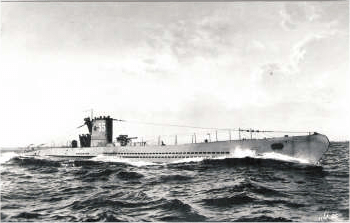 At 4pm on the afternoon of Wednesday the 4th October 1939 the realities of World War 2 reached the shores of the Dingle Peninsula. The residents of Ballymore, a fishing village 3 miles west of Dingle, noticed a strange craft heading for the rock at Ventry harbour. They rushed towards the shore and to their amazement found that members of the crew of the German submarine, U-35, were landing two Greek sailors from a rubber dinghy. After landing the men, the German sailors rowed back to the U-Boat and brought in two more men, and they continued to make the trip until 28 men were put ashore. The U-Boat came about a 100 yards from the shore and a number of people witnessed the ferrying of the Greek seamen to the beach. These survivors were from the 4990 ton Greek steamer “Diamantis”, which was carrying 7700 tons of iron ore from Freetown in West Africa to Barrow-in-Furness in England when it was intercepted by U-35, on the 3rd. October 1939 off the South-West coast of Cornwall in position 49.19N05.35W. U-35 was commanded by Kaplt Werner Lott. In an interview with the Kerryman newspaper in 1984 Werner Lott states “That in the rough weather I would not have been able to examine the ship’s papers, so I gave a signal to follow me,” he recalled. “I wanted to go to the Irish coast where I knew there would not be such rough weather. It did not follow me so I fired a shot from my gun at the bow of the boat. This had the result that the crew panicked and jumped into the small boats. One could foresee that with the rough seas that they would overturn.” The life boats did overturn and the German Captain decided to try and pick up the Greek crew. When all 28 seamen from the Diamantis were brought on board the U-35, three torpedoes were fired at the Diamantis and she sank within twenty minutes. The Greek crew were supplied with tea, hot food, and cigarettes, and had their clothes dried by the Germans. After dropping off the Greek seamen on Irish soil, the U-boat left Ventry harbour at a very slow speed. Some of the men, all of whom looked young, walked about the deck wearing oilskins and sou’westers. Others were on the conning tower. They waved to the crowd on the shore before the U-boat submerged. On the 29th November 1939, U-35 was sunk in the North Sea by depth charges from destroyers HMS Kingston, HMS Icarus and HMS Kashmir. All the crew were saved and were landed at Greenock, Scotland on the 1st December 1939. They were taken to the Tower of London where they were imprisoned for six to nine days. It was there that Lott met Captain Lord Louis Mountbatten, who was Commander of the destroyer flotilla which had sunk U-35. The Germans were then transferred to two other P.O.W. camps in England, Grizedale Hall in the lake district and to Camp 127 at Oldham, Lancashire. In early 1940 the German prisoners were transferred to Canada where they remained for the rest of the war, Lord Louis Mountbatten and Werner Lott remained friends after the war had ended. Werner Lott died on the 2nd May 1997 aged 89.

Email: administration@mariner.ie
We have wheelchair access (except for the gallery)

By continuing to browse the site you are agreeing to our use of cookies.