Menu
Where are the Barges now?

WHERE ARE THE BARGES NOW?

“Hey Mister. Will ya bring us back a parrot”. That, according to Dublin comedians and wits of the fifties, recalling the last glory years of the Guinness barges on the River Liffey, was the regular cry of Dublin jackeens perched precariously on the city’s famous Halfpenny Bridge to the elegantly dressed barge captains in their dark blue corduroys and shiny peaked caps as they passed underneath.

Mostly the captains used to ignore them, for privilege was theirs, the privilege of being established characters of Dublin of that time, pillars of the community, men with an urgent job to do in getting Dublin’s primary export safely over a Liffey mile to the ships that would carry it to the furthest ends of the world.

Sic transit gloria . All too soon their years were numbered. The advance of brewing techniques led to the development of Guinness breweries elsewhere.

Post Second World War development of road transportation of the big, round Guinness barrels, the building of new ships and the use of iron lungs and eventually the massive stainless steel ships’ tanks for the black stuff brought an end to this romantic trade. Still the memory remains.

Even today elderly folk with a knowledge of the tides on Dublin Bay might stand on O’Connell Bridge and imagine a re-run of the days when at high tide the Guinness barges would appear and pass under them with their smoke stacks lowered to accommodate the few remaining feet of space between vessel and the highest point of the bridge. Nostalgic stuff indeed.

Information supplied by the learned archivists of the Guinness Storehouse, St. James Gate, Dublin, shows that the original Guinness jetty at the brewery was built in 1873 and that the first of the steam-driven barges, appropriately called the Lagan, was built in Belfast by Harland and Wolfe.

The entire fleet of 13 was named after Irish rivers. The Shannon, built in Preston by Messrs. Allsop, followed six years later and then came, in rapid succession, ten barges built in Dublin by Ross and Walpole.

Their names were Liffey, Lee, Boyne, Slaney, Suir, Foyle, Moy, Vartry, Dodder and Tolka. Another, Number 22, was the Docena, bought second-hand in England in 1920. 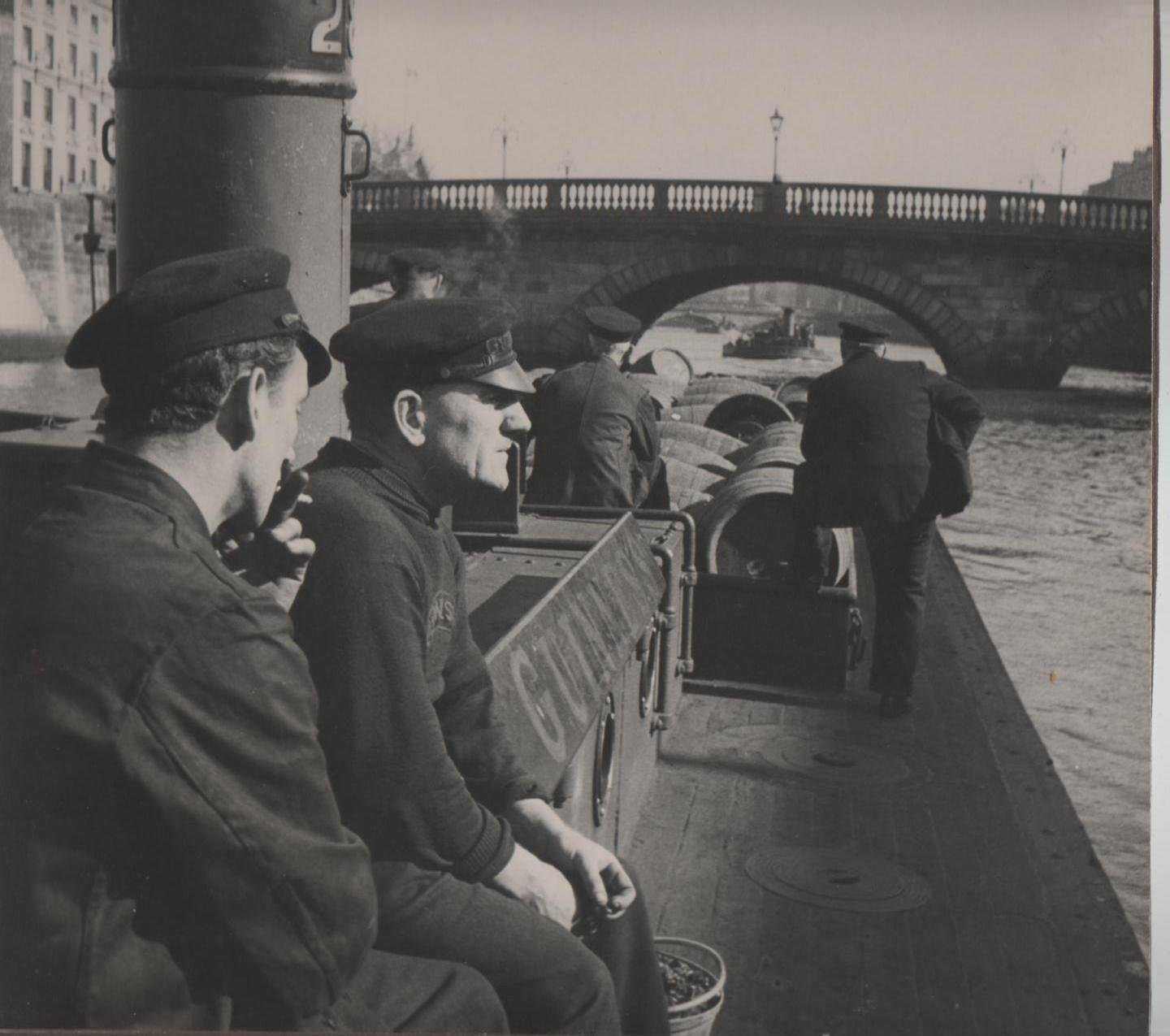 Gone to the war

The Guinness records show that the Liffey and the Boyne were commandeered by the British authorities during the First World War and the latter saw some service on the canals in France.

They also indicate that the Shannon was a mechanical monster being steam-powered and twin-screwed with a propeller and rudder fore and aft. She could not swing around at the jetty but went up and down the river without having to turn around.

“Her engine room was amidship and she had a loco-type boiler fitted crosswise over the drive shaft. The engine room was very hot and very uncomfortable for the drivers who had to come up a ladder from the port side on to the deck and go down another on the starboard side to keep minding the boiler, oiling the engine and looking after the pumps”.

The author of the Guinness notes added laconically: “I am not going to tell you what we called her.” In 1920 all drivers belonged to the Stationary Engine Drivers and Cranesmens’ Union and were paid the same rate as winchmen and cranemen in all the British ports.

The author of what the Guinness journal of the day, “The Harp” , describes as an informal historical survey is John Doyle, Foreman i/c Boat Engine Drivers, and we are indebted to him for his colourful picture of the frantic activity on the Liffey at that time.

“There was not a day at that time but at least eight barges sailed fully loaded from the jetty to Dublin Port.” He adds that this busy programme was carried out despite the problems of the time.

The years 1920 and 1921 was the period of the Black and Tans and at one time all drivers and all boat-men had to carry a pass from Dublin Castle for being out during curfew hours, as the work started on the jetty at any time between three o’clock in the morning and three p.m. according to the tide.

The Civil War started with the attack on the Four Courts and there was an early sailing that morning too. There was some discussion as to whether we should sail or not but we did and they were sniping at one another across the Liffey. I need not tell you the only men on deck were the skippers.

There was a lot of firing going on in O’Connell St. too.” Doyle recalls, adding: “We sailed all during that week and we got an extra week’s pay as danger money”.

Among the many incidents recorded by Doyle was when the Docena came downriver fully loaded and encountered very choppy water at Butt Bridge. She made an unsuccessful attempt to reach the security of Custom House Quay.

As the barge sank the crew scrambled to safety. A huge recovery exercise was mounted and every available barge that had discharged set about picking up the cargo.

Doyle adds: “I believe they got half the cargo but for months afterwards there were messages coming in about casks being washed up on beaches all around the coast. But by the time they were recovered they had been emptied.”

Towards the end of 1927 came the advent of a new fleet of barges. They were well-equipped, easily manoeuvred and ideally suited to the work and the entire fleet of ten was built by Vickers (Ireland) Ltd. in the Liffey Dockyard.

The first vessel, the Farmleigh was launched in November of that year, the other nine appeared in quick succession up to January of 1931.

The names of the other craft were Knockmaroon, Chapelizod, Fairyhouse, Castleknock, Clonsilla, Killiney, Sandyford, Howth and Seapoint.

These were intensely busy years for the Liffey barges and up to the mid-thirties the handsome fleet was a familiar sight for Dubliners. But times were changing and the opening of the Guinness Brewery at Park Royal on top of the arrival of a new fleet of lorries in Dublin took away a lot of port work from the barges. Farmleigh and Fairyhouse were sold in mid 1938. Farmleigh went under her own power to the Royal Navy’s huge base in Scapa Flow. Fairyhouse, also under her own power, steamed to the mouth of the Humber via the Caledonian Canal. She would later achieve glory as one of the fleet of small craft that participated in the evacuation of Dunkirk.

Later in 1938 Knockmaroon and Chapelizod were sold. Doyle comments that these sales were soon to be regretted by the brewery for with the outbreak of war in 1939 petrol became scarce and one had to wonder what Guinness would have given for the recovery of their four steam-driven barges.

“It is the proud boast of the boat engine drivers that during the whole of the Second World War not one cross-channel boat of our own, or belonging to any of the other companies left the Port of Dublin one minute late due to any delay from the barges” , Doyles revealing document recalls.

With the ending of the war and the return of plentiful supplies of fuel to supply the new fleets of large trucks, the use of the barges declined and in the years to come they would all be sold off in turn, one presumes with little difficulty, for they were still well-found, well-maintained craft with plenty of work years ahead of them.

If the Guinness barges could be said to have had a busy life steaming from the Guinness Brewery heavy loaded with barrels for the mile run to just beyond Butt Bridge it was nothing compared to the activity those that went to Lough Neagh in Northern Ireland were to be engaged in. Delivering sand from the Ballinderry River across the Lough to Toomebridge in Co. Antrim was a ten-mile run and the barges were solo-crewed.

One man who worked on every one of the former Guinness craft is John Joe Walls of Airfield Road, Toomebridge, Co. Antrim, who spent 48 years straight from school in the employ of Scotts of Toomebridge, who acquired six of the Guinness barges including two of the older variety, the Foyle and the Lagan, the others being the Killiney, the Chapelizod, the Castleknock and the Clonsilla.

Initially, before the advent of proper navigational equipment, finding their way around Lough Neagh was frequently a risky business. “All we used was a compass and a watch. You’d set your course and time your passage at an hour and ten minutes and by that time with any luck you’d make your landfall,” said John Joe.

After de-commissioning by Guinness the Lough Neagh-bound barges made their passage up the east coast to the point on the Co. Antrim coast where the River Bann meets the sea and were then towed to the Lough where their holds were considerably altered to accommodate their new business.

Down the years the barges were subjected to major engine change, eventually finishing up with six-cylinder Gardiner diesel power units that could give the craft with their heavy loads up to seven knots.

Sadly none of the lovely old craft survive. Two of them the Killiney and the Lagan, at the end of their working lives in the 1970s, were stripped of all useful equipment and sunk as foundations for new quays.

A portion of the Killiney can still be seen above water at Ballyginniff Point on the eastern shore of the Lough, 14 miles from Toomebridge. The Lagan’s last resting place is in Sandy Bay near Lurgan. John Joe says you might still see the side of her.

At the height of the Troubles in early 1970 both the Chapelizod and the Castleknock were blown up and totally destroyed.

The Clonsilla was heading back to Toomebridge full of sand at the end of the 70s when she sprang a leak and sank – in 104 feet of water! All that remains of her is the bell, now in the possession of Mrs Trish Boucher Street, wife of the noted American yachtsman and author, Donald MacQueen Street Jnr. of Glandore, Co. Cork. Mrs Street’s father was Mr Denis W. Boucher who, as a senior manager in Guinness Brewery presided over the sale of the final elements of the barge fleet, the Clonsilla being the last to go.

The Foyle went down on rocks near Lurgan in foggy weather in the early 50s.

Research has also established that the Shannon was wrecked off Balbriggan. On passage to a new life? The Slaney saw out her days also on Lough Neagh with the company Hutchinson Ltd., while the Suir and the Moy went south from Dublin, the Suir to work on the River Slaney and the Moy to the River Suir. Up to this time nothing is known of their fate.

Anyone with reliable information on other Guinness barges should contact Iris na Mara. This article would not have been possible without the information back up and support of Eibhlin Roche and Clare Hackett of the Guinness Archive. 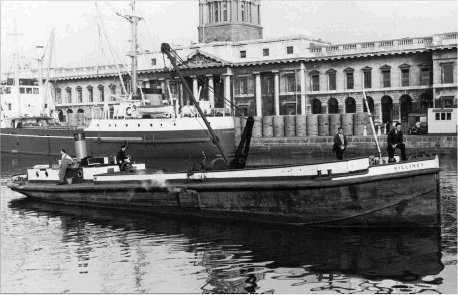