The Sinking of the RMS Leinster

The Sinking of the RMS Leinster

It was 10th October 1918. Britain was at war with Germany. At the Carlisle pier in Kingstown (Dún Laoghaire) one of the mailboats was loading. It was about to make its final trip to Holyhead, resulting in the greatest loss of life in Irish Maritime history.

The RMS Leinster was one of four mailboats named after the provinces of Ireland. It held the record for the fastest trip to Holyhead, 2 hours and 24 minutes. For the duration of the war it was painted in camouflage. It was armed with a light gun but relied on its speed to avoid the main threat, submarines.

The crew was almost entirely Irish or Welsh. There was a team of postal sorters working in the bow. The passengers were mostly military, some with families returning from leave. The RMS Leinster set sail at 08.50hrs with 771 people on board, under the command of Captain William Birch.

Unknown to the Leinster, a German U-Boat, UB 123 was off the Kish Bank. About an hour after departure, the U-Boat fired two torpedoes, one hit the bow of the Leinster and she started to sink. An SOS was sent.

Between 09.40 and 09.50hrs, three British destroyers picked up the message and raced to the location. Meanwhile boats and rafts were being launched from the sinking ship. The wind was blowing between a Force 6 and 7. The second torpedo struck the boiler room, fragmenting a lifeboat being launched at the time. The ship’s fate was sealed. It sank a few minutes later at 10.00hrs.

Although in relative terms, this disaster was much greater than the demise of RMS Titanic, it received very little publicity. The official loss of life was 501, but research to date has revealed the names of 529 casualties. Most affected were families from Dún Laoghaire and Holyhead.

October 2018 saw the commemoration of the centenary of RMS Leinster at the Museum. Dun Laoghaire Rathdown County Council funded an exhibition held at the Museum on this tragedy in the Irish Sea occurring 12.25 nautical miles (22.7 kms) from the Museum just one month before World War One ended.

Radio Officer Arthur H. Jeffries’ name on the former 180-year-old Mariners’ Church War Memorial serves as a poignant reminder of the 569 civilians, Post Office workers, crew and military of six nationalities who died. (The memorial can be viewed on the side of the altar in the Museum)

Visit the Museum and immerse yourself in the story: 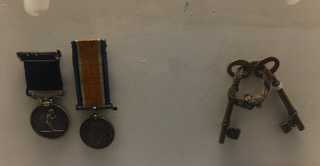 The Museum’s Amateur Radio Station with Call Sign EI100MCV (MCV was RMS Leinster’s call sign) is spreading the story of the RMS Leinster tragedy worldwide and has already received over 25,000 contacts from 77 countries to date see here

For a small island, we’ve produced some memorable and courageous maritime figures. You can see some of them here