John Richardson Wigham(15 January 1829 – 16 November 1906) was a lighthouse engineer.  He was a great inventor and successful businessman.  He was born in Scotland into a Quaker family.  (Take care not to confuse John Richardson Wigham with his cousin John Wigham Richardson, the shipbuilder, whose company eventually merged into Swan Hunter.)

They worked in iron and brass.  They finished pieces with tin-plate and japanning (a way of painting with metal).

In 1844, when he was 15 years old,  John Richardson Wigham left Scotland to Dublin, where he became an apprentice at Edmundson & Company, Caple Street.

John specialised in brass fitting.  There was a new invention – gas – for heating and lighting.  This gas was gererated by heating coal. Small fittings in brass were required. John designed, manufactured and supplied bass fittings for the new gas lights.

The next few years saw the ‘Great Hunger’. Many died from disease.  On 26 January 1848, Joshua died.  Although John was only 19 years old, he took over the operation of the company and provided for his sister and her children.

Under his direction, the company concentrated on gas lighting. They supplied gas facilities for large houses and business premises. Coal was loaded into ovens and heated producing gas which was kept in tanks which expanded and contracted with the volume of gas. This was prior to the provision of piped town gas.

In time, he was very involved with town gas and became a director of the Dublin Gas Company.

All the while, John Richardson Wigham was inventing.

A buoy at sea marked rocks and other dangers with a bell. It really needed a constant light. But that was impossible with oil lamps; that is until Wigham‟s 31-day light.

It was first used on the Clyde in 1861. His relatives, in Scotland, were involved in shipbuilding. He had an interest in lighting at sea. Initially buoys only had bells to warn mariners. The difficulty was in designing an oil-lamp which could burn while unattended and not be extinguished by waves and storms.

The first successful lighted buoy was patented by John Wigham in 1861.

John Richardson Wigham was a great inventor. We have many examples of his inventions in the museum.
Consider his “automatic electric light”; a simple idea; suppose there is a light marking the end of a pier, what would happen if a bulb blew and had to be replaced? It is easy to check whether a bulb is working, the current either flows or it doesn‟t.

It was Wigham who came up with this simple yet extremely useful invention.
Wigham came up with many types of oil lamps. He was constantly seeking a reliable brighter flame. Some of these were for different types of lamp oil, prior to paraffin (kerosene). He came up with the idea of concentric circular wicks. This example has four such circular wicks. He used similar ideas with his later gas lights, which became known as “crocus lights‟.

With his experience of gas lights used from the gas generators he was supplying to buildings he concluded that gas light was far brighter than the oil lamps then used in light houses. He came up with a design and presented it to the Dublin Ballast Board in 1862. 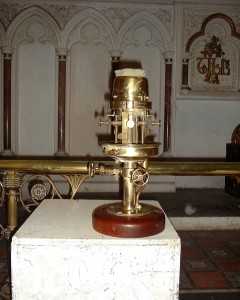 They agreed to fund his research. The result was the first gas light to be used in a lighthouse, when it was installed in the Baily.

He also invented a “gas gun”. Actual cannons were fired to warn ships of a rock when the fog was dense. Wighams gas gun, again first used at the Baily used a controlled gas explosion.

He suffered a great deal of prejudice, because he lacked a university education and operated out of Ireland. There were several serious disputes with English engineers including the Stevenson brothers and Sir James Nicholas. Douglass was involved in bitter public disputes with John Richardson Wigham. Wigham demonstrated that gas lights were superior to oil lamps, Douglass, then chief engineer to Trinity
House, disagreed. 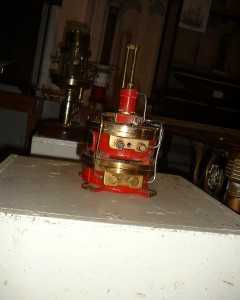 In these acrimonious disputes, Wigham could rely on the support of the Dublin newspapers of the time and of Parnell‟s Home Rule Party. There were, on occasion, impartial external authorities introduced, such as Dr John Tyndall, who was appointed as scientific advisor to Trinity House. He described an argument against Wigham as “the inaccuracy-of-the-Irish-mind hypothesis”. Eventually, Dr. Tyndall resigned, saying “The struggle with Mr Douglass in regard to this Irish question took up, however, too much of my time, and I accordingly sent in my letter of resignation”.

In 1863 the Dublin Ballast Board funded Wigham’s research and the new gas light was installed in the Baily Lighthouse, they then converted other lighthouses until Trinity House prohibited further conversion of lighthouses from oil to gas. After pressure from the Irish Parliamentary Party, in 1871 trials were conducted at the two Happisburgh Lighthouses comparing oil with gas.  The tests were falsified. Douglass claimed that “the large gas burner was ex-focal and therefore that it was totally useless and wasted”.
Stevenson produced cost estimates of running the gas light, compared with oil, which were greatly exaggerated, and ignoring actual costs of running the Baily gas light.  It was later established that the lighthouse keeper was instructed not to turn the gas light on by more than a quarter of its capacity.

Dr Tyndall wrote: “I have reason to know that before his lamentable death, Thomas Stevenson, this highly distinguished man, became fully convinced of the merit of Mr. Wigham, and of the demerit of the attempt made afterwards to deprive him of his righteous due”.
Douglass claimed that the design of “superposed lenses” at the Eddystone Lighthouse of 1882 were his. The same design “bi-form lens” was used by Wigham in the Galley Head lighthouse in 1877. There was a public dispute. Wigham had patented his design (Patent number 1015) in 1872. Wigham successfully sued Douglass for infringement of patent, and Douglass was ordered to pay £2,500 to Wigham.

Douglas still received a knighthood for his work on the Eddystone Lighthouse.

The £2,500 was actually paid by the Board of Trade.
Wigham‟s patents were compulsorily acquired by the British government. Wigham was offered a knighthood, but declined „for religious reasons‟.
John Richardson Wigham is buried in the Quaker cemetery at Temple Hill, Blackrock.

A curious aside: the Ayrton Light which is above the clock on Big Ben, the English Parliament.  (Ayrton was the Commissioner for Works).
In 1871, an electric arc light was installed. In 1874 this was replaced by a Wigham 68-jet gas burner.

In 1870, the light at Wicklow Head was fitted with Wigham’s patent intermittent flashing mechanism, which timed the gas supply by means of clockwork. When this mechanism was combined with a revolving lens in Rockabill Lighthouse, the world’s first lighthouse with a group-flashing characteristic was produced. Each lighthouse now has a unique flashing sequence, so that the lighthouse can be identified.

Wigham had many inventions, principally in the area of maritime safety. He invented new oil-lamps, gas-lights and electric-lights,  fogsignals, buoys, buoy-lights and acetylene lighting equipment. As lighting moved from oil to gas to electricity, he was always ready to innovate.

Lights supplied by Edmundson & Co  were used in lighthouses all over the globe.

Wigham was constantly inventing. After he died, this cabinet was in his work-room. It is full of inventions in progress.
Here it stands, with a newspaper article, on the finding of this cabinet, attached.

He supplied  lighthouse all over the globe. This cabinet had a drawer for each lighthouse he supplied. The index cards recorded the work carried out and/or parts supplied by Edmundson‟s (later F. Barrett & Co) of Schoolhouse Lane, off Capel Street Dublin.