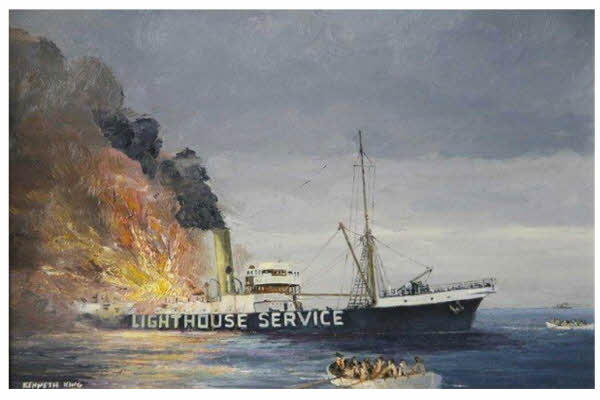 Elleesa Rushby MA, a current PhD student at the University of Bedfordshire, UK., is researching ambiguous loss in descendants of the SS Isolda sinking. Ambiguous loss occurs where the body of a loved one is never found. The Irish Lights Tender SS Isolda was sunk by the Luftwaffe on 19 December 1940 while carrying out reliefs on the Barrels and Coningbeg Lightships and this year will be the 81st anniversary of the sinking.

Elleesa has previously won the Listowel Festival Writer’s Week.ie, Short Story competition and is a regular contributor to Ireland’s Own Magazine. Elleesa brings a wealth of historical knowledge and creative storytelling to the subject and is the granddaughter of William Rushby who was one of the six men killed.

The talk will look at new primary evidence to re-tell the story of the sinking, commemorate the men who were lost and the widows who mourned them, placing the sinking of a quite ordinary Irish Lights Tender in the complex and often secretive world of Emergency Ireland.’

This talk will be hosted through Zoom.