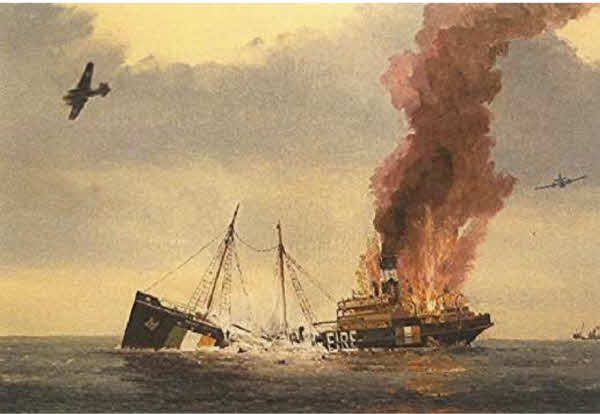 We welcome you to our new season of winter talks.

He has lectured widely and published extensively in the Irish Sword, in Decies, and other journals. He is currently a Research Associate in the School of History and Geography, Dublin City University.

For most of the Second World War the Irish Sea was a quiet naval haven where outward-bound convoys assembled, inward-bound convoys dispersed, and the escort vessels of the Royal Navy trained and prepared for the Battle of the Atlantic – all without interruption from German U-boats or aircraft.

There were however times when the Germans focussed their attention on the Irish Sea, most notably in 1941 and in 1945, and it became a very dangerous stretch of water for the ships plying their trade there, including the small number of Irish coastal vessels.

These vessels were crucial to Ireland’s survival as a neutral nation. They carried Irish exports of food to the UK and brought back essential supplies of coal, oil and other necessities. This talk looks at the various offensives mounted by the Germans in the Irish Sea and the impact on the ships servicing Ireland. The small coastal vessels serving Irish ports included British, Norwegian, and Dutch registered vessels. All were exposed to danger, and some paid the ultimate price.

This is their story….