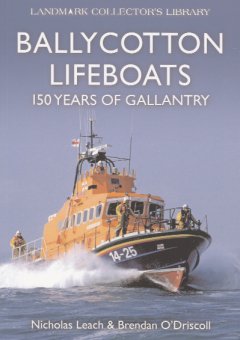 The history of Ballycotton Lifeboat Station Co. Cork was launched by RTE presenter and personality Derek Davis in the town in early July.

Ballycotton lifeboat station is one of the most famous in Ireland. Established in 1858, the station has a long and proud history of rescuing those in peril off the coast of County Cork. The first lifeboat was powered by oars and sail, launched from a carriage and kept in a house between Egan’s shop and Duffin’s. Following this first un-named lifeboat a number of pulling lifeboats were operated until September 1930 when the first motor lifeboat, Mary Stanford, was sent to the station. The twin-engine lifeboat greatly improved the capability of the station. She was involved in the outstanding event in the station’s history, in 1936 when the Gold Medal was awarded to Coxswain Patrick Sliney, and Silver and Bronze Medals to his crew, for the service on 11thFebruary to the Daunt Rock light vessel. The lifeboat did not return to her station for three days and was on service for 63 hours, during which time her crew had only three hours sleep. For 25 hours they had no food and all came back suffering from colds and salt water burns. The casualty’s crew of eight were rescued after the lifeboat went alongside the plunging vessel, with seas sweeping over her, more than a dozen times. This was one of the most exhausting and gallant services in the history of the RNLI.

With such a rich and interesting history this volume, gives a complete account of the station, from the early days to the present and its Trent class lifeboat, covers much ground and will have a general appeal. For people wishing to buy the book contact Bláthnaid Lane Walsh,
3 Beachview Heights, Ballycotton, Co. Cork.
email: ballycottonrnli14@eircom.net phone: 087 4151475